Milking plants by the roots for make-up, care, etc. 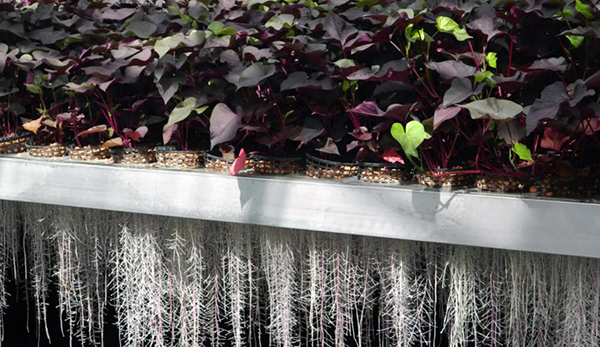 Milking plants by the roots for make-up, care, etc.

Plant Advanced Technologies biotech has been commercializing plant molecules for fifteen years, which it obtains by soliciting the roots of plants. The cosmetics industry, but also pharmaceutical laboratories and food groups are interested in this rare resource.

"Plants hate nature." This statement by a Dutch horticulturist has guided the biotech company Plant Advanced Technologies (PAT), which holds the patent for "milking plants", for the past 15 years. In their natural state, plants compete fiercely for water, light and nutrients. To protect themselves from the onslaught of fungi, animals and other plants, they have developed valuable molecules that humans have long known how to use. But he has always had to destroy the plant in order to extract aspirin from the spirea, curare from the Strychnos toxifera vine or taxol from the yew.

And what if, instead of pulling it out, we pampered the plant so that it continuously secretes the coveted molecules? The idea germinated in 1999 in the minds of two researchers from the Agronomy and Environment Laboratory at Ensaïa, in Nancy. To all intents and purposes, Frédéric Bourgaud and Eric Gontier patented the concept of an industrialized sampling of root exudation from the soil under the name "milking plant". Three years later, Jean-Paul Fèvre, former director of research for the Euralis agricultural cooperative in France, Argentina and the United States, moved to Nancy to take a closer look at an absolutely new method of cultivation. "It was necessary to implement stimulation strategies on a healthy plant to obtain, via its root system, the molecules of interest present in trace amounts, which are usually only expressed in the event of aggression," explains Jean-Paul Fèvre, now CEO of PAT.

PAT won the national prize for business creation as soon as it was created in 2005. The milking plant concept amuses journalists, interests the cosmetics industry and attracts investors. The team, which was thinking of positioning itself on the pharmaceutical market, won its first R&D contract with Chanel for an anti-aging product extracted from edulis, a fatty plant native to South Africa. In 2009, in the midst of the financial crisis, it managed to raise €9 million on the Euronext free market. Introduced at 12 euros, the share is now trading at around 20 euros, after peaks at 30 euros.

In the meantime, PAT has acquired 3 hectares of horticultural greenhouses in Laronxe (Meurthe-et-Moselle). About twenty species of plants grow there at one meter above the ground, their roots bathing in a trough. A fine mist provides them with the necessary nutrients, but also with elicitors, compounds emitted by aggressors and which stimulate their defenses, almost the concept of a vaccine. Thus spurred on, they excrete up to a thousand times more rare molecules than they would have produced by trituration. Three to six times a year, the "milking" is done either by pressure (osmotic) before filtering the bath water. Or by cutting the fine part of the roots, which will be crushed or dried, while the plant continues to grow slowly. The in vivo extraction allows to harvest on 1.000 square meters of greenhouses the equivalent of 30 hectares of cultivation.

The growth will have been long, but the ex-start-up is starting to bear fruit. It has evolved into a group whose parent company, based in Vandoeuvre-lès-Nancy, employs 40 people, including 20 PhDs in biology, and generated 1.7 million euros in sales in 2019. The partnership, signed last November with the chemist Clariant, now enables PAT to indirectly supply cosmetic groups worldwide. In February, this cooperation resulted in the launch of the anti-wrinkle product Prenylium, extracted from the root of the white mulberry tree. "We are molecule discoverers. We are discoverers of molecules. We put a unique technique in the world at the service of a scientific approach applicable to cosmetics, but not only to it," emphasizes Jean-Paul Fèvre.

The group has acquired half a dozen satellites created from scratch, bought out or co-developed. The Belgian company Straticel tests cosmetic molecules in vitro. Rochefortais Couleur de Plante revives the ancestral techniques of vegetable dyes. In Reunion Island, Pat Zerbaz - from the Creole name for medicinal plants - promotes, while protecting them, endangered species. In Nancy, Temesis is entirely devoted to the development of an effective anti-inflammatory against psoriasis. Cellengo, the latest cutting to date, specializes in microbial fermentation. The platform proposes to industrialize biomolecules to provide active ingredients to the cosmetic, nutraceutical, pharmaceutical and phytosanitary markets, without consuming agricultural land.